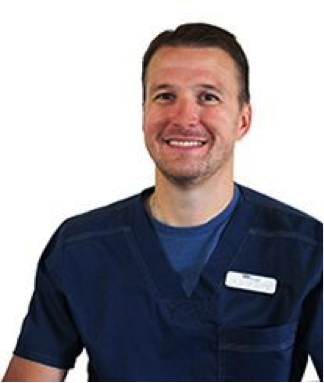 Dr. Jason K. Rhynes has roots that run deep in Durant and southern Oklahoma. A native of Durant, Dr. Rhynes is a 1994 graduate of Durant High School and is the son of Keith and Barbara Rhynes of Durant. With the addition of Dr. Rhynes to the staff of Clay-Rhynes Eye Clinic in 2002, our clinic was able to expand both services and availability to our patients.

Becoming a partner in the practice in 2003, Dr. Rhynes further cemented his love for the area, as well as his dedication and commitment to his patients.

In 2002, he was awarded his Doctor of Optometry degree in ceremonies at Northeastern State University. While a student at NSU, the College of Optometry also recognized Dr. Rhynes as best overall graduating student, as well as presenting him an award for demonstrating excellence in patient care. In addition to his doctorate, he had previously earned a Bachelor of Science degree in 1998 and a Bachelor of Vision Science degree in 2000 from NSU. While serving as class president all four years of Optometry College, Dr. Rhynes served on the Dean’s Leadership Council, was nominated to the Gold Key Honor Society, and was a five year member of the American Optometric Association. In addition to training at W.W. Hastings Hospital in Tahlequah, he served an externship at the Veteran’s Administration Hospital in Muskogee, and received his laser certification in 2001.

In November 2019, Dr. Rhynes was named chairperson for the Medical Advisory Committee (MAC) at the Oklahoma Health Care Authority. MAC provides input to OHCA as they work to develop and implement successful health care policies and procedures.

Dr. Rhynes and his family are active members of Fusion Bible in Durant, where he serves as an Elder. A member of the Durant Lions Club, Dr. Rhynes was named “Lion of the Year” in 2004 and served as President in 2010-2011. He and his wife Heather are the parents of twins, Kohl and Madilyn, born on February 20, 2002. He also is a proud uncle to two nephews and two nieces.

You can schedule your next appointment with us online!